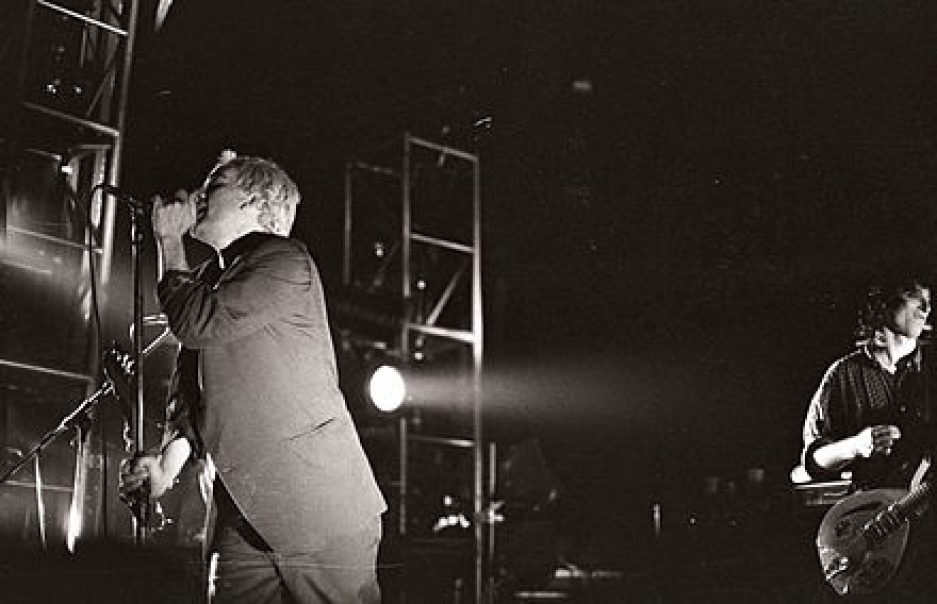 This weekend the Ryder Cup has splattered notions of golf’s crustiness.

I’m thinking it’s not just me that conjures visions of a greying generation, pre-disposed to moral outrage? Eyeing disrespectful teens slashing wildly on their hallowed first tee? Stiff, de-sexualised figures in pink v-necks clubbing in weirdly uncoordinated fashion at an unresponsive white dot? Silently enduring the cruelties of this stationary-ball-over-human massacre with a seething grace.

That’s how it seems, mostly – golf. But think again; get with it! Rack up the virility; ignite the intensity; come o-on people, get altogether bigger and realer; more… Chicago!

Feel the wind of change, my friends. Feel it here at Medinah. It smells of beer, lakes and a charged banter largely unknown to the ‘traditional club golfer’. Boisterous knockaboutarama, veering to fist-pumping rather than mildly flannel-fluttering entertainment. Far, far too visceral and lusty and nose-bleed inducing for any middle-class frump-in-a-Pringle. Culminating in the most extravagantly tense denouement – as exciting and strangely impactful, you felt, as any contact sport could be – interestingly. (Not that Keegan Bradley and Ian Poulter seem to have been involved in a non-contact sport these last three days.)

The final thwack, which began with our European brotherhood down in points accumulated towards the critical total of 14, had a dramatic prologue. One which we felt we may need to refer back to if such and such happened to beam in the most luscious or most tart possibilities; well, it did. So remember then.

A fulminating charge led late on Saturday by Spiky of Stevenage – aka Ian Poulter – transforming the atmosphere from Doomsville Illinois to something more appealingly Homely Counties. (Make that Countries). An act of will, or two, or five from the man (actually) most likely to be targeted by Yankee vitriol for his raw competitive edge bent the score back towards a more Euro-sympathetic margin. Put simply, he out-yanked the homesters, being pugnaciously In Their Faces, answering their bawling with birdies.

Still, at 10-6 down rather than the deader than dead 11-5, or even the 12-4 that loomed in Olazabal’s darkest recesses, things seemed set for a home-nation roustabout. Instead, a fight-back of the most searingly monumental kind gathered itself. Not in some linear way helpful to our emotional calm but in the most traumatically unaided-by-hand-holds cliff-climb.

Miraculous enough that the top-loaded line-up of Euro-stars eventually, to a man clambered breathless to the summit; Donald,McIlroy, Poulter and Rose all winning in a fashion that varied from LUUU-UUKE’S quiet authority to Rose’s stunning and ultimately successful haul up and over the unbelieving corpse of Mickelson. But the carnage to expectation continued.

We might need new-fangled verbage to characterise the tension; I’m yer man and I’m going for paralytically abstract-volcanic; meaning it went ballistic and back, in high definition kodacolor… with divots… and then some. In an early, shocking daub, that seemingly dormant Aberdonian Paul Lawrie eviscerated Snedeker of the States in a manner that did register, in all this flux, as a properly scaled flagging up of European ambitions. Inspired does not do it justice. The ball rolled.

By the time Garcia cobbled a win against a withered Furyk and Westwood stamped on Kuchar the odds on an almost impossible comeback had scorched from OMG/possible to relentlessly likely; if only Kaymer or Molinari could get something.

Europe had garnered 13 points in what was plainly already one of the genuinely great sporting comebacks, against a home team enjoying belligerent support and 100m wide fairways.

But where did all this come from? We were later to learn that Team Captain Olazabal had excelled himself in the motivating-through-cathartic-blubbing department but live, as it happened, the collective feat of The Euros was a thing of socialistic beauty as much as a Spanish Revolution.

It was essentially – ill-advisedly? Inevitably? – again a war on the shore; with the foot-soldiers from Spain/Sweden/Stevenage advancing as one in a relentless anarchistic surge. They were brilliant, then humbled, then more brilliant again. The golf itself – or the meaning of it – becoming increasingly hard to follow, or bear, or disentangle from beery fantasy. The computations too slippery to gather, the crowd reflected at least as much as it bayed.

Last two Americans out were Stricker and Woods. Playing respectively against the strapping (but struggling) Kaymer and the fluent but unstarry Molinari, this had something of the Out-of-Sorts Club about it. Prior to about the 13th, these games had relatively quietly flipflopped from red to blue and back on the scoreboard as though safe in the knowledge that they wouldn’t actually count. Such was the force of expectation for an untroubled American victory. This changed.

Kaymer – a German Major winner, in fact, but in danger of being bypassed by the billion lenses following this event – was a banker for inconsistency to the end. I blame him now for everything from my hangover to the inadequate bailout of Greece. He, it was, who became central to the unravelling.

Hard to say whether there was A Moment (before Kaymer) when the US fell off that cliff. Perhaps it was when Furyk endured petrification of a sort around two successive greens late on. Perhaps when Justin Rose absurdly rolled in the winning putt against Mickelson – that very symbol of undeniable American wonder. Perhaps when an almost embarrassed Garcia snaffled a point. The very last moments were in any case screechingly fraught with that near unwatchable mixture of horror and magic.

Kaymer struck a wonder-shot from the bunker on 18 but then a jangled putt that left him with seven feet further. For the Trophy. We Europeans reached inside ourselves for memories of German doughtiness under pressure; and just as we were finding them, the ball dropped; to pandemonium. Garcia, inevitably, was first in to lift the ecstatic marksman.

At the final hole Woods, apparently nobly, offered up the most generous ‘gimme’ in world history to procure a further half point – and outright victory – for his lifelong pal Francesco. (Later he woke up with the bookmaking population of the Mid-West battering at his windows. And that friendship cooled.)

The celebrations, the emotions, the sentimentality around a certain mythic Spaniard were top-drawer. Laced with champagne and tears, led – or should that be shared? – notably by a now fully-rounded and expressed Poulter and the irrepressible Garcia, a merry dance unleashed itself from the tee. It really had been special, this – the more so because this was a victory clearly predicated on belief, on brotherhood. You know – those American staples.

Before we get carried away with mere history, a distraction or two if I may. On the subject of the game itself – our perceptions regarding.

We’ve all got friends who hate golf. I know I have. They either just find it dull, or they don’t get the prevailing stuff – the slacks, the sweaters, the no women(!) thing. I’m with them on all of that.

Plus I’ve been there, as a slightly bewildered 10 year old when my dad was politely asked to leave a club house for not wearing… a collar. I’ve been on the receiving end of world-class pomposity from stewards, players and assistant pro’s at courses so average in every respect you cannot imagine what gives these people the right to snort so, down their carbon-shafted nostrils. In fact, as I write and the words drip blackly onto the page I realise in truth I’m heavily pre-disposed towards despising this game… golf.

But it can be glorious. On a sunny day, balmy wind, with your swing – delicious or devilish? – entirely and often mysteriously under your spell. Infuriating and difficult as golf may be, the purity – the sweet spot – at its heart is exactly that. If those precious things tempo and balance conjoin through that rather explosive instant – the moment of impact – a very special thing happens. Something with its essence in the primeval, perhaps, such is its simplicity. A quiet joy, an arrow.

It may be one of the great feelings in sport to clonk – no creammm a four iron off the fairway. When that ball has been flung so beautifully from the arc, the envelope of your body you hardly felt resistance from the turf; in fact something in that turf seemed to propel the thing forward, so that the conspiracy of loveliness seems complete.

So, as with everything, feelings are conflicted. Great game/twisted game. Full of poetry/full of crap. Golf.